Just a word on these sightings. The Official Loch Ness Monster Fan Club started this register in 1996 and this register continues to collect data to this day. The sightings reported between 1985 (when Henry Bauer's list concluded) and 1995 have been collected from a number of sources - direct reports, newspaper articles, Rip Hepple's Nessletters, the Loch Ness Mystery Blogspot (where the Nessletters are now digitised) and with the help of Dr Charles Paxton of St Andrews University

14.9.99
It was around 11.30 a.m. when a couple touring the area spotted in Urquhart Bay what they first thought to be a car tyre on the surface of the loch. It appeared to be about three feet long and one foot tall at its highest point. The object then moved against the waves formation in the area creating a wake as it did so. The couple saw some kind of water disturbance about three feet behind the black coloured object, which appeared to rise slightly out of the water before submerging.

5.7.99
A couple on holiday from Huntly witnessed a creature in the middle of the loch at 9am.  They watched as it moved up the loch for a period of around 20 minutes close to the Loch Ness Caravan and Camping Park. An experienced whale watcher, the man said that he had never before seen anything like it.

30.3.99
A group of 6-7 people saw a head and neck rise from the water 200 yards from the south shore of the loch.  The watched as a black shape rose and then disappeared only to reappear a few minutes later.  The was witnessed from a lay by opposite Urquhart castle.  One witnessed described the head as being about 18 inches in height.

For the first time in since June 1963, Nessie was spotted out of the water on the shores of Loch Ness by an American visitor to the area.  This unique sighting took place at 8.30 in the evening on the beach between Dores and Foyers where the creature, said to be between 10-15 metres in length with a long neck, scurried off into the water as the man approached.

22.9.98           A monster hunter undertaking an early morning watch of the loch reported a strange fast moving wake near the Loch Ness Caravan and Camping Park at Invermoriston.

5.9.98          Mr Mitchison from Newcastle man and his family were aboard the boat “Nessie Hunter” when the man videoed an unidentified creature just south of Urquhart Castle.

30.5.98          A Marlborough woman reported a black object about ten feet high in the water directly beside Urquhart Castle.

26.12.97 -  at 8.30am Aron Bowers was driving up the hill on the A82 out of Lewiston when glancing out to his left, eh and his friend from Stoke saw a distubanc eout in Urquhart Bayopposite Temple pier. There was a c100 foot linear disturbance of water about 3-4 feet wide which was attached to a 50-60 foot circular disturbance. The appearance was of a sizeable object that had sped away from a stationary position, turned and circled to the left and disappeared.

24.10.97    A black hump appeared in the water near the jetty at Fort Augustus.  A man on holiday from Birmingham took two photos of the creature.

13.8.97       A large  dark coloured object appeared in the water near Abriachan and moved through the water at speed.

9.8.97   A camper staying at the Loch Ness Caravan and Camping Park at Invermoriston reported a strange incident which happened at 3 o’clock in the morning.

2.7.97    The “Royal Scot” from Fort Augustus had two sonar contacts at a depth of 400 feet in a trench just north of Fort Augustus.

21.6.97     A dark object was spotted  moving swiftly across the loch about one mile south of Urquhart Castle at 0900 hours.

14.6.97     A pole like object  appeared from the water near Dores on top of which was a small head that looked around before disappearing.

28.5.97 – Elaine Hall saw a series of humps move through the water at Invermoriston

22.3.97    Richard White of Muir of Ord was travelling down the south side of the loch when he saw a number of black humps moving through the water about 200m from the shore. This is what he saw: 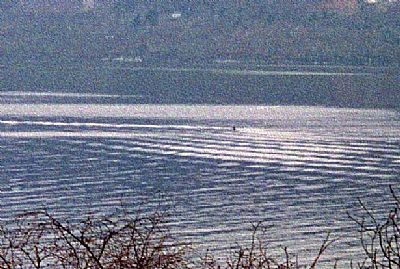 17.3.97  A local man from Glenurquhart reported seeing two humps in the water close to Abriachan.

16.2.97   A family reported an object travelling quickly through the water near Foyers

The Bob Rines expedition also had four large contacts on sonar in the Urquhart Bay area during the summer, bringing the total number of contacts to 17.

13.5.96     Object and wake seen just off Urquhart Castle around midday

9.8.96         Photo taken of unidentified object in water opposite Urquhart bay

Bill Bolton & Allan Whitfield spotted something unexplained from the Loch Ness Submarine in July - reported in the Sunday Telegraph 30.7.95

25 July 1994 – Peter Hanson of Richmond, Yorkshire, snapped a creature ‘with a long neck’ when he took a trip in the Loch Ness Submarine.

2 September 1994 – Luis and Luisa Guimares, on holiday from Portugal, snapped three black humps and a wake in the loch opposite Urquhart Castle. The sighting was witnessed by Inverness taxi driver Iain MacGregor.

22 June 1993 - Edna MacInnes took picture showing a wake moving down the loch near Dores. The creature was also seen from the other side of the loch by James McIntosh and his son

Mr. C. Mitchell spotted something unexplained on May 5 at 6.30pm off Foyers – reported in Nessletter 119

Late 1992 - in new analysis completed in 2020, long time Alan McKenna investigator reviewed footage from a 1992 documentary. A slowed down portion of the original video appears to show an animate object, larger than a seal or otter, in the loch. The original footage can be seen at this link at the 14:40 timing mark:

30 November 1992 – Jockie Thomson of Primrose Bay, Invermoriston reported seeing a creature with a large head rising about 4 feet out of the water – the sighting lasted three minutes.

Mr and Mrs Fulton spotted something unexplained from a moored boat on September 19 at 10.30am in Urquhart Bay – reported in Nessletter 112

July 12th- Murdo Urquhart reported seeing a green/black creature near Aldourie Castle in the early evening. He wasdriving at the timeand unable to stop to get a better look - reported in Highland News

Steve Feltham spotted something unexplained in May at Fort Augustus, Loch Ness – reported in an interview in CFZ Yearbook 2004

28 June 1991 – early in the morning, Margaret MacLennan of Dores reported seeing a creature that was around 6 feet in length with a ‘crocodile skin’ moving against the wind some 30 yards from her house. The sighting was reported to Steve Feltham

26 April 1990 – Trevor Davis and Jimmy MacIntyre, both of Inverness, reported seeing a ‘huge creature’ circling in the water near the mouth of the River Foyers. Its neck rose six feet out of the water.

30 May 1989 – Mr & Mars Bergquist, visiting from San Diego saw a large hump with its own wake at 11.30 am in clear bright weather. The sighting took place in the loch off the Clansman Hotel.

25 June 1989 – Mrs Judy Chafin, visiting from Vancouver Island filmed a 10ft long animal with a basketball sized head zig zagging across Urquhart Bay at 4.45pm in the afternoon. The sighting was verified as an unknown animal by Dr Gordon Williamson, an Inverness based Marine Biologist.

Neal Stevenson  spotted something unexplained off Urquhart Castle on October 25 at 10.45am  - reported in Nessletter 91

31 August 1988 - John Galbraith, Skipper of the Campbeltown based Prawn Trawler ‘Sapphire’ picked up an usual sonar reading in Foyers Bay. The creature was estimated to be between 90 and 120 feet long and the sighting lasted two minutes.

Norman Mackenzie spotted something unexplained on June 3 at, Johnny's Point (2.5 miles off Fort Augustus) - reported in the Sunday Post

Mr. D.C. Williams spotted something unexplained on May 19 – reported in Nessletter 93

Andreas Trottman spotted something unexplained in Urquhart Bay at around 6.30am in early May - reported in Nessletter 93

9 October 1987 – Adrian Shine, leader of Operation Deepscan, located a large unidentified moving object in the loch. He acknowledged that it was a living creature.

Tommy Mattson spotted something unexplained in the middle of the loch on August 22  at 2.47pm - reported in Nessletter 86

Ron MacLennan spotted something unexplained on July 23 at 4.40pm, near Tor Point reported in Nessletter 83

Barbara Grant    spotted something unexplained on July  21 at 8.30am near Abriachan – reported in Nessletter 83

Eoin O Faodhagain, visting from Ireland reported "On the afternoon of the 15th of July 1987, I was upstairs in a scheduled bus, coming from Fort Augustus going to Drumnadroichit. The day was overcast and there was a force 8 gale blowing north south with a swell on the Loch of two to three feet. Nearing Invermoriston, as I was gazing through the window of the bus, I noticed a large boulder, like a huge rock out in the loch. I knew as a glacial lake there wasn't any boulders out in the loch as the sides go straight down. The object was mottled brown in colour and the swell of the waves only came up half way on the object so I estimated that it was at least five feet out of the water, the length looked more than the height maybe five to eight feet long. I could not say it was moving, as the bus was moving, I got the impression, it was stationary. I watched the object for less than two minutes, but it felt like eternity, that was the effect it had on me, stunned. My sighting ended when as the bus got nearer Invermoriston,  the dreaded forestry got in the way of my line of sight at the loch, and no more of it could I see or my Nessie. At the time I felt overwhelmed and deflated all in the space of two minutes. I was out on a small cruiser the next day at the castle and after speaking to the skipper, that is when I found out what the swell was on the Loch the previous day, and with this information I was able to judge how high this object I saw was out of the water. I never opened my mouth on the bus during the sighting, I was too engrossed what I was looking at to say anything."

Dr and Mrs Ayles spotted something unexplained in early March at 3.55pm – reported in the Press and Journal March 7th 1987.

12 November 1986 – Mr Alan Lamb and his wife Helen spotted a dark grey object in the middle of the loch opposite Urquhart castle. The sighting took place at 8.45am and lasted 5 minutes.

17 August 1986 – Sharon Boulton and Catriona Murray, both of Drumnadrochit, reported seeing a dark shape surfacing and submerging near Urquhart castle