You've probably heard of Route 66 in the USA but this tells you how to navigate the MONSTER 66. If you leave Inverness City Centre by car, bus or on foot, head south to Fort Augustus on the north side of the loch on the A82 and then when you get to Fort Augustus, head back to the same spot in Inverness you left from by coming back via the B862 on the south side of the loch, you'll have travelled just over 66 miles - the MONSTER 66. The starting point is Inverness Museum and Art gallery where you can look in on Pessie, Nessie's prehistoric cousin.

Leaving the city centre, you'll pass all the great lookout points for seeing Nessie. The most common place to start is what is known as the Wellington Layby. This is on the A82 just after you reach the loch and is so called as a WWII Wellington Bomber crash landed beside it during the war - it was raised from the depths in the 1980s. At this point, there are plenty information signs to tell you a bit about the loch.

Further on and you reach the Clansman Hotel - the only hotel that has rooms to let directly overlooking the loch - you can stop here for a quick bite or a coffee in the Cobbs shop while you look for Nessie. You can also join Jacobite Cruises here for a quick trip out on to the water.

The next best stop is the piper's layby. This is just before Urquhart Bay and looks over to Urquhart Castle - you'll recognise it when you see it.

Just back from the water is Drumnadrochit where you'll be able to visit the two Nessie centres and top up on food and souvenirs. There are a number of boat trips that leave regularly from here as well

Next up on the way to Fort Augustus is Urquhart Castle by Drumnadrochit (pictured below). A grand place to do some Nessie spotting from, it gets very busy in the summer. 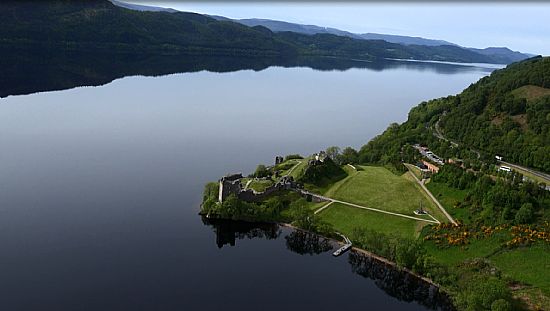 After that, you pass the Cobb memorial - a tribute to John Cobb who died at the loch trying to beat the world water speed record in the 1950s and shortly afterwards, you'll see a sign for Achnahannet, the HQ of the Loch Ness Investigation Bureau in the 1960s. From then through to Fort Augustus, there are various stopping off points from which to have a look at the loch. Have a look into Invermoriston village on the way - another place to stop and have a bite to eat.

When you reach Fort Augustus, pop out to the end of the canal as it joins the loch and see the view all the way back up the 24 miles to the top. Lots of Nessie sightings have been reported from here and the old abbey next door. You can also join Loch Ness Cruises on their regular trips or take a fast rib trip up the loch.

The next part of the journey takes you away from the loch side for a while as you climb up to the head of the Stratherrick valley - the view at the highest point is a bit like sitting on top of the world. As you follow the B862, it'll take you into Foyers village - you want to head to Lower Foyers where there is great access to the loch. This was where legendary monster hunter Frank Searle was located in the 1970s. Leaving Foyers, you'll past the ruin of the house of devil worshipper Alisteir Crowley, once also owned by Led Zeppelin guitarist Jimmy Page.

The MONSTER 66 then takes you through the village of Inverfarigaig and finally to Dores. All along this stretch are great stopping off points with beach access to the loch.

When you reach Dores, you can drop in on monster hunter Steve Feltham at the Dores Inn - you can enjoy some food at the Inn and from the beach side location look the other way down the most famous 24 mile stretch of water in the world. 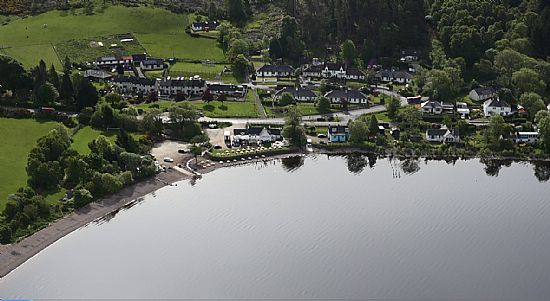 Travelling back into Inverness city centre, you'll pass the big Nessie at the Holm roundabout - this was made famous by Charlie Sheen when he tweeted a picture of him on top of the monster.

Alternatively, if you can't make it to Loch Ness in person, you can listen to a song about Nessie from anywhere in the world by Eddie Cairney or you can see the loch live via the Nessie on the Net webcam.